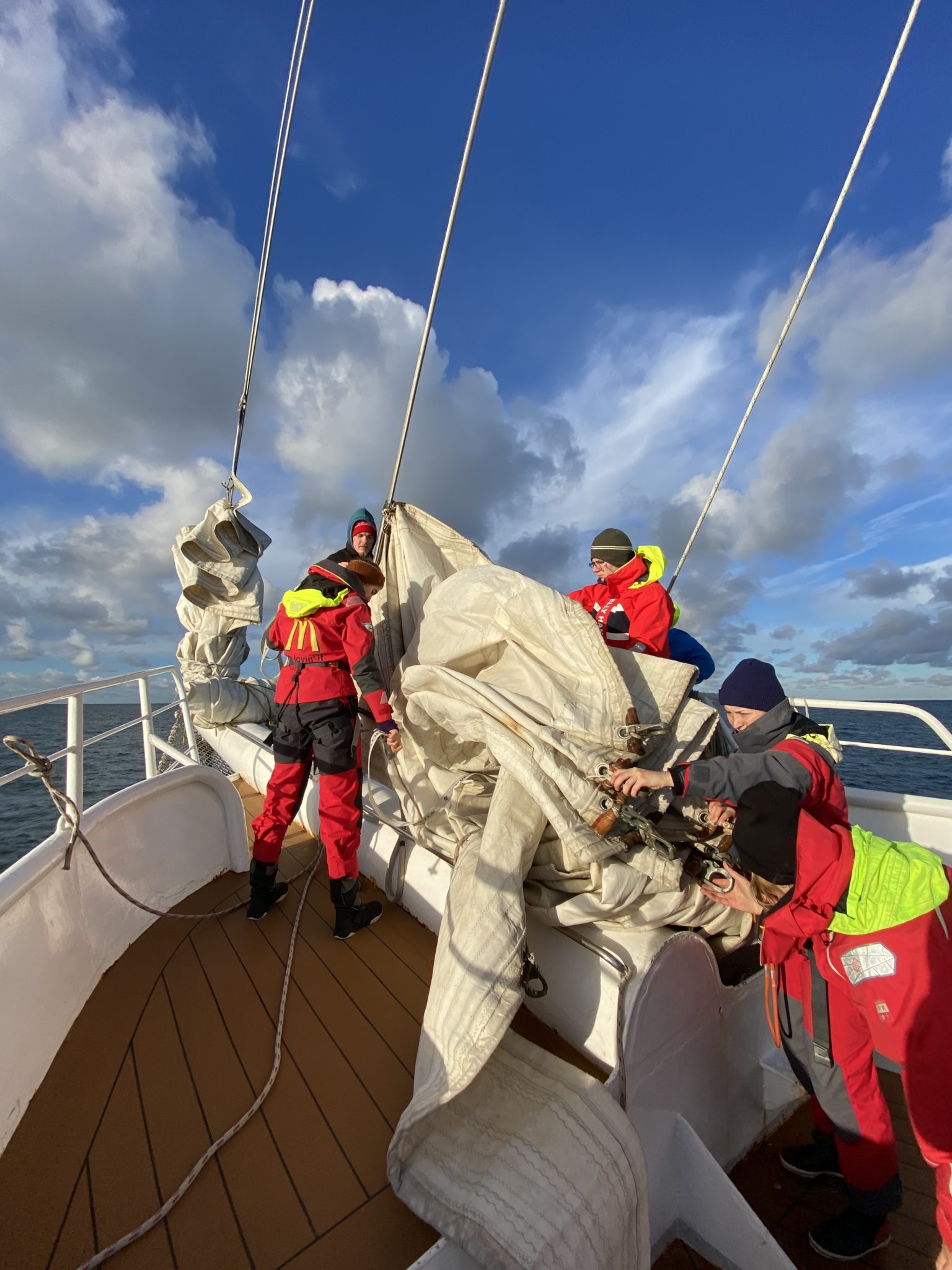 Today it was the start of race. We had the 4 to 8 watch and the plan was to hoist the sails during our watch, but unfortunately there was no wind at all. We waited for wind to come and luckily there was a beautiful sunrise. We enjoyed watching, made a lot of pictures and saw the other ships around us. Together with the other ships we slowly moved towards the starting line. And after breakfast we set sails and at 11:00 we crossed the starting line!!!!
We saw a Noorse vinvis, Jeroen spotted it and Mathijs came up to the bridge telling us about the whale and then we all looked and try to see it as well.
Now we have our 00 to 04 watch. During this watch we tried to beat the red watch and sail more than 11 nm during our watch, this meant that we had to sail an average of 2.8 knots. At this moment we are on our way to beat the amount of miles. We also did three safety tours around the ship. And Karla, Liesbeth and Louise made toast for all of us:)

Today we started with a midnight shift, and a midnight shift means pan toast! After that we sang a lot of songs from the songbooks. It had a magical feeling singing with a sky full of stars. Apart from seeing an oilrig with more lights than a Christmas tree, not much happened that morning. At around eleven o’clock the race started for us, exciting!! There wasn’t much wind so we stayed together with the other sailing vessels for quite a while. We were at the front of the pack and had quite a good start. Because of some sleepiness of a few of our watch we brought out the water guns, so we had local rainfall, like really local… We also brought out the fire hose to test the water pressure in case of an emergency, and of course because it was a lot of fun. We tried to scare away some seagulls but they weren’t impressed. It’s quite powerful though, so we had to hold it with 2 people, and even then with 2 hands! After everything was cleaned up we got some ice cream!!! Just before diner someone shouted “dolphin!” so we all had to go and take a look! It turned out to be a Norwegian Finfish (hopefully properly translated). The last shift of the day we had a beautiful sunset and Sander told us about the ‘Small polar bear club’. It’s quite a difficult riddle but eventually a few of us got into the club!

This morning the ‘Fryderyk Chopin’ started closing in on us, after they received some dirty wind from us, and fell back they returned to our side. Luckily for us, just like a lot of the other ships, they went for anchor because they didn’t get enough wind. We just continued sailing, well… floating, and passed them with the traditional Eendracht yell and a lot of horn beeping. We got really close to an oilrig, when we passed it a helicopter took off. Sadly, it didn’t give us any extra wind and we even lost more speed, there just wasn’t enough wind to get anywhere. We even hit a whopping 0 knots! The seagulls, from yesterday that where close by, easily passed us swimming. Maarten, one of the bosuns, even made a funny little comic about it. In the evening some grabbed a guitar and started singing in English, Dutch and Polish! We went to bed early because we had to get some sleep for the next day.

The first watch after our last update was the “sunset watch”. As the name describes, we saw the most beautiful sunset at this watch. We also had a lot of fun singing and dancing to either Danish, Dutch and Swedish songs. The wait itself was pretty calm and easy with little complications and easy going winds.
After a normal night of sleep, a very exciting day was ahead of us. Because the race was starting that morning! After we got spoiled with pancakes for breakfast, the race started at 10. Even though there was no wind, the watch was pretty intense because all 8 sails had to be hoisted. With a lot of helping hands, it wasn’t a though job. The rest of the watch was nice and not so eventful. That afternoon for dinner we had some really amazing vegetarian lasagna. Most people got in bed early because at 4 in the morning our next watch started.

This morning we finally got some wind. We went a whopping 5 knots at our peak (sadly later in the day we are stuck on 1 knot again ). Next to the good speed, the sunrise also made our watch, with almost every pretty color in the rainbow. And to top it all off we ate some great tosti’s to end our early watch.
Currently we are dependent on the current floating with a speed of 1 knot. As the weather is amazing, the rest of our watch is having a water fight while cleaning.

Life on board of the Eendracht is pretty damn good.

We made toast again this morning at 4! When we came up and looked around us, we saw a familiar sight: the oilrig from yesterday! Luckily for us, it was now in the distance, behind us. And around 6 o’clock we got a beautiful sunrise that gave us a lot of nice pictures. We also had some nice stories from our watch officer. At the end of our watch the wind slowly started raising and we picked up some speed again (3 knots!). Because of our location we even passed close to one of the smaller ships, ‘Tara’, that we normally wouldn’t have been able to keep up with, or even see after the first day.

This morning we were woken up at 11 to the captain calling all the trainees to the mess room, where he gave us some good news!!!! The wind was picking up more and more and because of that we were finally third place among the class A ships. Now our average speed is about 4 knots. If we can keep up this speed, we should hopefully pass the finish line on Monday. In the last few days the watches have been quiet with little work, but today we finally got to work more with the sails. It’s nice to learn more about sailing and the ship instead of just sitting around even though it was relaxing and fun. Today more people also got into the polar bear club